Plant a tree in memory of Barry
An environmentally-friendly option 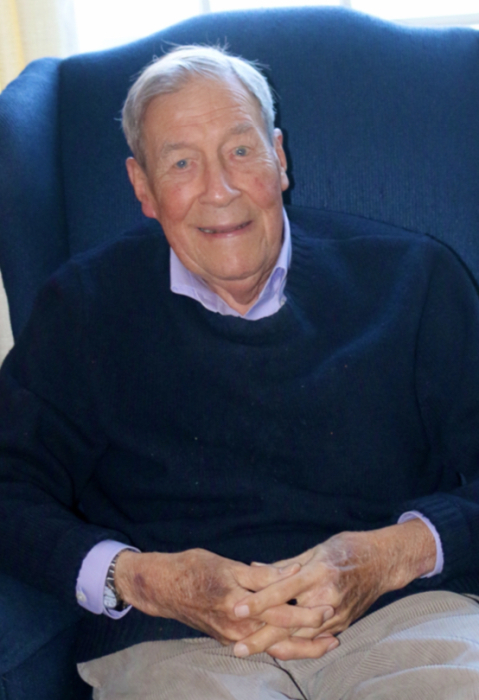 Barry Andrew Carson, 94, passed away on July 7, 2021. He was born on February 11, 1927, the son of the late Rollett and Alice (Armstrong) Carson.
Barry grew up in Shaker Heights, Ohio. He attended University School in Shaker Heights and Milton Academy in Milton, Massachusetts. As a freshman and sophomore at Harvard University, he played on the varsity hockey team, before serving in the U.S. Army Occupation Forces in postwar Japan from 1946-47. Then, he made his way to the North Country. Barry attended Clarkson College in Potsdam, New York, graduating in 1953. While there, he met Patricia Harrington. They married on September 1, 1950. In 1955, they built their first and only home on Cleaveland Avenue in Canton, where they lived all the years of their lives.
Barry was an avid golfer, spending weekend mornings on the gold course. He and Pat enjoyed frequent trips to Ottawa, Canada to see concerts and shows, dine with friends, and shop for art and antiques. In 1980, they attended the XIII Olympic Winter Games in Lake Placid, later gifting each grandchild with a jaunty beret emblazoned with five interlocking rings to be worn in a family portrait.
Barry worked for ACCO Products in Ogdensburg for many years before shifting his focus to banking. He was employed by St. Lawrence National Bank, which later became Community Bank, until his retirement. He

closed his career with distinction, as Vice President of Operations for the Canton branch.
Barry is survived by his children, Barry Carson Jr. and wife Eve Stoddard, and Carol Carson-Leinhart; his five grandchildren, Brigid Fisk and husband Justin, Abbe Duke and husband Tom, Katerina Leinhart, Braeden Leinhart, and Traesa Leinhart; and his four great granddaughters, Clare, Ella, and Alice Fisk, and Nyah Leinhart. Barry was pre-deceased by his beloved wife, Patty, nine years to the day of his passing.
Barry’s grandchildren and great grandchildren will remember his dry humor, his consistency and strength, and his unflagging support for all their endeavors, particularly in sports. Steady and strong-willed, his love for his family can be seen in the abundance of photos and home movies he captured over many years.
Per Barry’s wishes, there are no calling hours. Burial will be in St. Mary’s Cemetery, Potsdam, at a time to be decided upon by the family.
In lieu of flowers, contributions may be made to the St. Lawrence County Historical Association or American Cancer Society.

Stories and memories, as well as condolences, may be shared with the family online at www.olearyfuneralservice.com.

Plant a tree in memory of Barry by clicking here.
To send flowers to Barry's family, please visit our floral store.

Plant a tree in memory of Barry
An environmentally-friendly option

Plant a tree in memory of Barry

1 tree planted in memory of Barry

So sorry to hear of Barry's passing. Everyone here at Mort Backus and Sons, and especially myself, enjoyed doing business with him over the years.  He wasn't just a customer but a good friend and a true gentleman.  Our condolences go out to everyone in the family.

When I began my banking career in 1972, Barry was the branch manager and my first boss at St. Lawrence National/Community Bank in Ogdensburg. I remember him as soft spoken and very friendly. My condolences to his family.

Barry was my supervisor when I worked in the Deposit Operations Department of St Lawrence National Bank/Community Bank.  He was one of the nicest people to work for.  In 2005 I left the Bank and went to work at Office for the Aging where I had the chance to speak to him several times on the phone when he called.  I got the chance to see him 2 years ago when our office delivered a Christmas present to him.  My thoughts and prayers to all of you.  He will be missed.

A Memorial Tree was planted for Barry A. Carson

Plant a tree in memory of Barry